Can Mice Sense a Cat in The House

Deborah Torres
Table of Contents show
1 Do Cats Keep Mice Away?
2 Why Do Cats Like to Chase Mice?
3 Do Cats Actually Scare Mice Away?
4 Conclusion

Mice are believed to be able to sense a cat in the house even before the cat shows itself. This is thought to be due to a combination of factors, including changes in air pressure and the scent of the cat. Mice are known to be very cautious creatures and will often flee when they sense a cat is in the house. 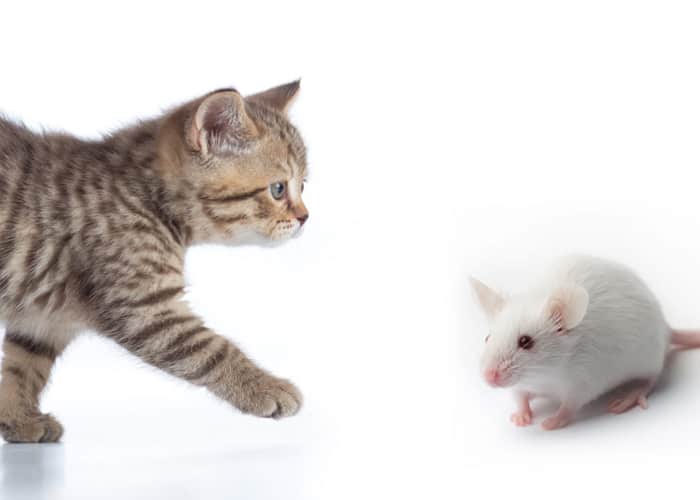 Do Cats Keep Mice Away?

There is a longstanding debate over whether or not cats actually keep mice away. Some people swear by the theory that cats are natural predators of mice and that having one in the home will help to get rid of any unwanted pests. Others claim that this is nothing more than an old wives’ tale and that there is no scientific evidence to support the claim.

The majority of research seems to suggest that, while cats may kill some mice, they are not necessarily effective at getting rid of them. In fact, there are many instances where rodents have managed to thrive in homes with cats present. This may be because the presence of a cat does not always stop a mouse from entering a home, nor does it ensure that the mouse will be killed once it arrives.

Cats are natural predators and mice are their typical prey. In the wild, a cat’s diet consists mostly of small rodents like mice. Domestic cats still retain these predatory instincts, even though they may never have to hunt for their food.

Chasing and playing with a mouse is instinctive behavior for a cat. It gives them a chance to practice their hunting skills. Catching a mouse also provides mental stimulation and physical exercise for a cat. Plus, it’s just plain fun!

Do Cats Actually Scare Mice Away?

Cats have long been considered natural predators of mice, and many people believe that keeping a cat in the house will help to keep mice away. However, there is no scientific evidence to support this claim. In fact, studies have shown that cats are not particularly effective at hunting and killing mice.

So why do people believe that cats scare away mice? It may be because cats are larger animals than mice, and their mere presence may make mice feel threatened. Additionally, cats typically have a strong hunting instinct and are known for being curious creatures, so they may be more likely to investigate a mouse in the home than other animals.

If you’re looking for a way to keep mice out of your home, you’re better off using proven methods like traps or pest control measures.

In conclusion, mice can sense a cat in the house. The presence of a cat causes the mice to change their behavior, including increasing their activity and altering their movements. While more research is needed to determine the full extent of the mouse-cat relationship, this knowledge can help humans better understand and potentially manage these pests.

Can Mice Climb Into Your Bed?

Do Mice Come to Clean Houses