It’s impossible to argue with the fact that the bird of paradise plant is one of the most gorgeous flowering plants of all, a truly spectacular, colorful, and engaging plant that looks quite unlike anything else you’ll find in nature. 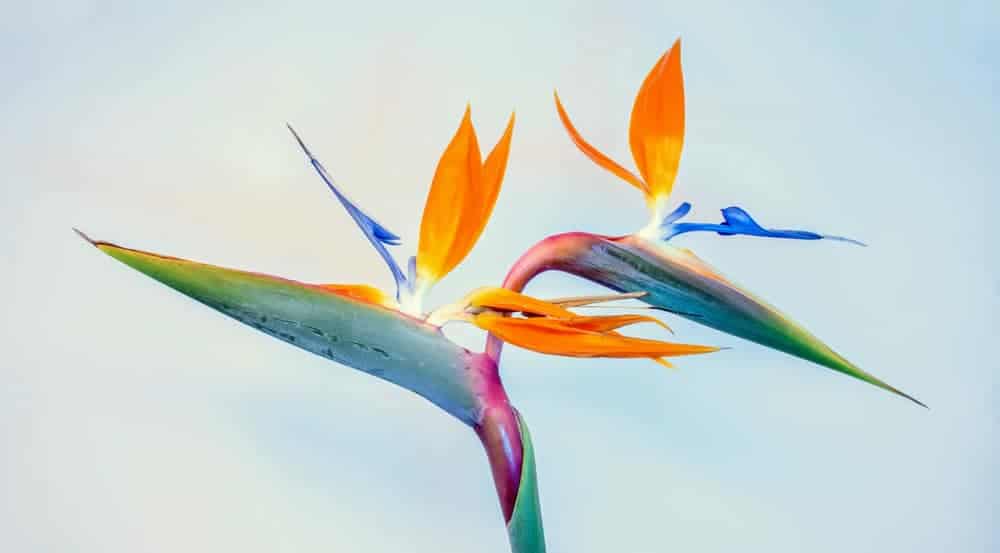 At the same time, trying to grow a bird of paradise outside of its natural habitat in tropical and semi tropical zones outdoors – or trying to grow it anywhere indoors, for that matter – has proven to be quite a bit of an uphill challenge, even for those with green thumbs.

Of course, that doesn’t mean that you aren’t going to be able to cultivate beautiful bird of paradise plants with just a little bit of additional care and attention.

In this quick guide we highlight some of the key things you want to consider when it comes to bird of paradise plant care, learning the ins and outs of what makes bird of paradise flowers so hard to develop, and mastering the intricacies of growing these plants in pretty much any condition imaginable.

For starters, the bird of paradises that most people are familiar with have also been colloquially referred to as the “crane flower” and are called this because of their unique and unusually configured flowers that look a lot like birds striking out in flight.

These plants need a tremendous amount of warm temperatures, just the right amount of water, and a lot of sunshine – but even the United States Department of Agriculture reports that individuals can grow these outdoors in Zones 9 as well as 11, with folks living in more northern zones having an opportunity to grow them outdoors during the summer while moving them inside during the winter.

It is been your dream to create truly spectacular bird of paradise flowers all on your own then you are in luck. Thanks to major advances in technology (and the easy accessibility of top-tier gardening solutions) it’s easier today than ever before to grow and cultivate your own bird of paradise plants with spectacular orange and blue flowers – though you’ll need to zero in on the details and data we highlight below.

For starters, the soil that these flowers should be planted in needs to be very rich but also needs to have a high level of drainage as well.

The flower is really going to bloom in full figure when it has been exposed to a lot of sunlight, though any plants you are planning on growing and cultivating indoors as a container plant should be kept away from southern facing windows. It might sound counterintuitive, but sticking a bird of paradise in a southern facing window is a surefire way to burn that flower rather than give it the nourishment it is after.

Anytime your bird of paradise is exposed to temperatures that get as low as 24°F, however, you’re going to be looking at quite a bit of damage that may destroy the plant completely.

Regardless of whether or not you are going to be growing your bird of paradise indoors exclusively or only going to be moving them indoors after the summer growing season has closed with colder weather on the horizon it’s important to understand exactly what you need to do to help these flowers thrive.

For starters (as we highlighted above) you’ll want to make sure that you are planting these flowers into potting soil that has a high level of drain ability. Not only should the soil itself be able to shed a lot of excess moisture on its own, but you also want to take the next step and drill drainage holes in the actual containers themselves to make sure that water isn’t going to stand in the container that you are growing this plant inside of.

Far too many people give bird of paradise plants a lot more water than they actually need, making it harder to grow these plants as opposed to easy to grow indoors.

What you want to do instead is only water the soil that your plant has been put inside of every couple of weeks, saturating the soil just until it is wet to the touch and then not adding any extra water whatsoever until it feels dry.

In the winter you want to produce your water rings even more so, reducing the overall water level that you feed your plant to as much as 50% of what you usually give it during the springtime. This sounds counterintuitive to what you might do with other subtropical plants but it’s the only way to make sure that your bird of paradise excels inside.

Unsurprisingly, every bird of paradise (like a lot of other flowering plants) will require quite a bit of “food” to open up, to flower, and to reach its full maturity level. It’s a good idea to feed your plant early in the spring on a two week basis with a water-soluble plant food option (available at retail stores and online) cutting things back to just once a month during the summer and then about every three weeks in the wintertime.

You also need to make sure that you aren’t ever planting your bird of paradise to deeply inside of the soil in the container. Some root exposure will help promote flowering later down the line, and a pot bound plant will almost always produce more blooms when you give it a bit more exposure rather than bury it deep inside a mountain of earth.

Best of all, you won’t have to worry about potting and repotting your bird of paradise on an annual basis the way you might with other subtropical plants. Thanks to the growing conditions that a bird of paradise needs you should only really think about moving your flower every three years or so (and only in the springtime) – though you’ll really only need to make this move if the roots are starting to cramp up.

If you are going to be growing your bird of paradise outdoors it’s important to understand that it’s going to need a little bit of extra attention on a five-year basis.

For starters, you’ll want to divide any of the plants that have established themselves in the ground on a five-year cycle. This gives the root system time to refresh itself and rejuvenate, but it’s also a great time to remove any of the broken and expired leaves as they establish themselves.

Another care to you’ll want to keep in the back of your mind is the value in removing flowers after they have already established themselves and are beginning to wilt.

It’s always going to feel like a bit of a crime to trim a bird of paradise flower from the plant once it begins to lose a little bit of its luster, but that’s the only way to make sure that the underlying plant structure itself is strong, stable, and healthy enough to continue flowering again and again.

A lot of people are unaware of the fact that these plants can most definitely be propagated directly from seed, but that’s a really long road that you’re going to have to have quite a bit of patience for. It’s not at all uncommon for these kinds of plants to hold off on their first bloom for five years after they have been started from seed – and you won’t really start to see spectacular flowering until much later in its life cycle if you’re going to take that kind of approach.

If you are going to be planting outdoors it’s always a better decision to go with an already established planting that you’ve been working on indoors or one that you purchase from a garden shop or florist.

You’ll be able to shortcut the growing process significantly, will stand a great chance of seeing a bloom the first season your flower establishes itself in the outdoors, and won’t have to deal with the waiting game that propagating from seed inevitably brings to the table.

Interestingly enough, bird of paradise plants are going to have to contend with the exact same kinds of diseases and pests. As a general rule these flowers are pretty hardy compared to some of the other subtropical flowering options you could decide to grow, but that doesn’t mean that you aren’t going to have to contend with funguses, mealy bugs, spider mites, and scale.

There are a couple of different approaches you can take to eliminate these kinds of issues while saving your plant at the same time. Most florists recommend you take advantage of specific sprays and insecticides that have been designed for the bird of paradise plant or options that are intended for use with subtropical plants like this as well.

While the overwhelming majority of bird of paradise plants are going to look nearly identical to one another (especially to an untrained and casual onlooker), there are two major different types of and you may be interested in growing one or the other.

The Strelitzia version of the bird of paradise plant is most commonly found throughout the subtropical regions of Florida, Southern California, and all over Hawaii and is usually the type of bird of paradise plant that most people conjure up in their mind’s eye when they are thinking about these gorgeous flowers.

The flowers of this variety are significantly larger than the other that we will highlight in just a moment, and these flowers also have what has been described as a “tongue” – usually a beautiful shade of blue – that is quite a bit different than the other variety as well.

Scientists have classified six different species of this plant, each of which have a different color and shade, and the tallest of the bunch is the ability to grow upwards of 30 feet tall. These plants have very little cold tolerance whatsoever but can be grown indoors with the tips and tricks we highlighted above, though you might need to move them outdoors if you’re plants really start to expand themselves.

The Caesalpinia type of bird of paradise plant is the other variety that you’ll find around the world, with a much smaller flower that is surrounded by larger leaved bushes that give it a bit more elegance and a more classic structure.

Scientists technically classify this flower as a legume, with more than 70 different individual species of the plant itself – with a multitude of shades, colors, and variations that really make this flowering plant spectacular to look at and add to your garden.

You’ll most likely find this version of the bird of paradise plant in Mexico and throughout Central America, with this species really only climbing to heights of between 12 and 15 feet tall. Some of the older plants left to develop in the wild in Mexico can get to 30 feet tall or taller, though this is incredibly rare.

At the end of the day, the bird of paradise plant is a lot easier to take care of than it may appear at first.

Sure, the flowering portion of this plant is very elegant, very delicate, and very luxurious to look at but the plant itself is rather hardy as long as you focus in on the tips and tricks we’ve included above.

This isn’t by any stretch of the imagination the easiest subtropical flowering plant to grow (particularly for interior decorations), but with a bit of due diligence, conscientious care, and attention to detail you’ll find that it’s much easier to develop this flower than you might have thought at first. 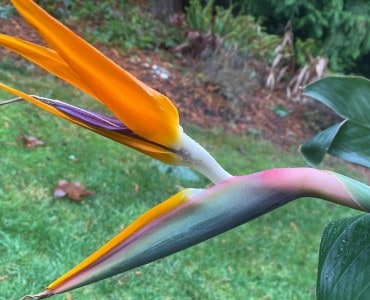 Facts about Bird of Paradise Plant 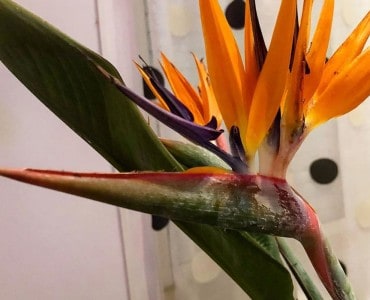